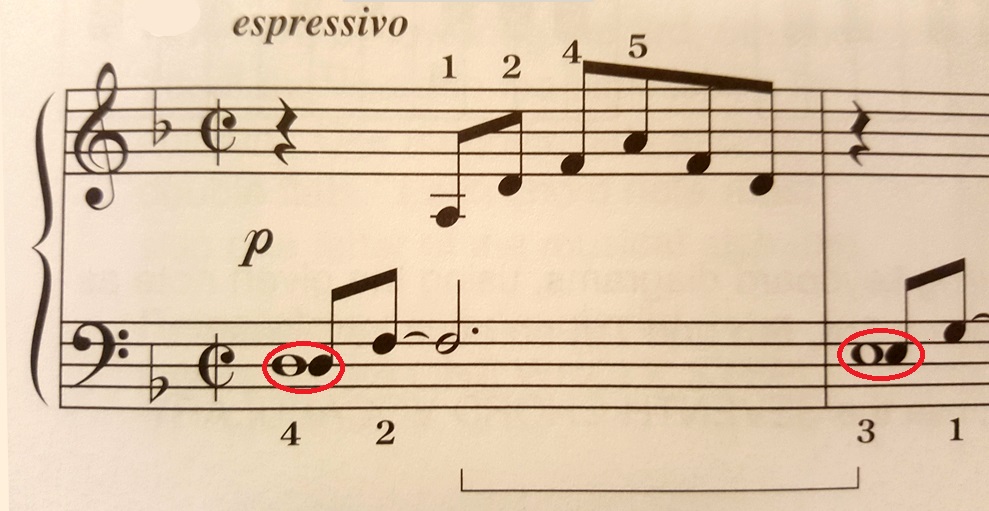 Finger Pedaling or sustaining notes is an advanced technique that originally came from the piano. You can see from the diagram it’s represented notionally by placing two of the same identical notes side by side with one being a quarter note and the other being the same note of another time value.

What Does The Finger Pedaling Technique Require

The Finger Pedaling technique requires you to hold down the identical neighbouring note (circled in red) for the time value as indicated by the note on the left while playing the remaining notes in the bar. In this diagram example you’d hold down the D (bass clef) for 4 counts while playing the remaining notes of the bar. Sorry treble instrument players, I haven’t added an example in the treble clef but you get the idea, the same concept will apply should you see it in the treble.

I know some of you are thinking that this notation of Finger Pedaling it’s not needed anymore as you can use the sustaining pedal or write music in 2 parts to achieve the same objective and to be honest I don’t think I’ve seen it in recent sheet music, however it does exist and it can give a different dynamic to how music can sound.

At the very least now when you see this notation on any sheet music you’ll know what to do, you may even want to try it out on new compositions.

If you have any questions or comments on Finger Pedaling please feel free to leave them in the comments section below.